Conversations: Photography from the Bank of America Collection comprises more than 100 photographs drawn from the renowned Bank of America Collection. The exhibition documents the evolution of photography since the 1850s and presents some of the most notable photographers of the 19th and 20th-centuries. Hand-picked from thousands of photographs, the works are displayed so as to create “conversations” between images by individual artists and across a wide range of themes, including portraits, landscapes, street photography and abstraction.

The exhibition presents works by some of photography’s most celebrated names, from 19th-century innovators Gustave Le Gray, Julia Margaret Cameron and Carleton Watkins, via 20th-century luminaries: Alfred Stieglitz, Harry Callahan, and Irving Penn, to contemporary image makers: William Eggleston, Thomas Ruff and Cindy Sherman. Modern works are juxtaposed with older works, European with American, and staged subjects with documentary images. These conversations create unique visual groupings, including images of visitors responding to art in museums, such as Thomas Struth’s Audience 4 (2004), which shows people gazing upward at Michelangelo’s statue of David at the Academia Gallery in Florence, and Musée du Louvre 4, Paris (1989), where visitors contemplate Théodore Géricault’s famous Raft of the Medusa in a Louvre gallery.

Conversations: Photography from the Bank of America Collection is made possible by the Bank of America Merrill Lynch Art in our Communities Programme™. The exhibition was originally curated by the Museum of Fine Arts, Boston, travelled to the Museo del Novecento in Milan, and has now been re-interpreted by the Irish Museum of Modern Art.

This exhibition presents the famous Ned Kelly series of paintings by the celebrated Australian artist Sidney Nolan.  Painted in 1946 and 1947, the series takes the form of stylised depictions of the exploits of the notorious bushranger Ned Kelly in the Australian outback.  The works were originally held at Heide Museum of Modern Art, Melbourne, where Nolan had painted 26 of the 27 when it was the home of his close friends John and Sunday Reed.  They were gifted to the National Gallery of Australia in 1977.

The Ned Kelly series follows the main sequence of the Kelly story.  However, Nolan did not intend the series to be an authentic portrayal of events.  Rather, the various episodes became the setting for the artist’s meditations upon universal themes of injustice, love and betrayal.  The Kelly saga was also a way for Nolan to paint the Australian landscape in new ways, with the story giving meaning to the place.

Born in 1917 in Melbourne, Sidney Nolan attended the National Gallery of Victoria School of Art.  He was conscripted into the army in 1942 and began to paint his immediate surroundings the Australian outback.  In 1945 he began his first paintings on the theme of Ned Kelly.  From 1953, Nolan began travelling extensively from his base in London, he painted many remarkable series of works inspired by his travels to Europe, Africa, China and Antartica.  Nolan made several visits to Ireland, where he painted his Wild Geese series, inspired by the many Irish soldiers who fled the country after the failed Jacobite wars of the 1690s, representing them as well-known latter day exiles and wanderers such as James Joyce and Ernest Shackleton.  Six of the series were donated to the IMMA Collection on the foundation of the Museum in 1991, and a further work, Gallipoli, 1955, was donated the following year.

Major retrospective exhibitions of Sidney Nolan’s work include the Whitechapel Art Gallery, London, 1957; National Gallery of Victoria, Melbourne, travelling to Sydney, Perth and Adelaide, 1987; and more recently at the Art Gallery of New South Wales, Sydney, 2007.  Nolan’s work is widely represented by the National Gallery of Australia; The Tate, London; The Museum of Modern Art, New York; the Pittsburgh Museum of Art, and the Irish Museum of Modern Art.  Sidney Nolan was knighted in 1981 and was awarded the Order of Merit in 1983.  He died in London in 1992. 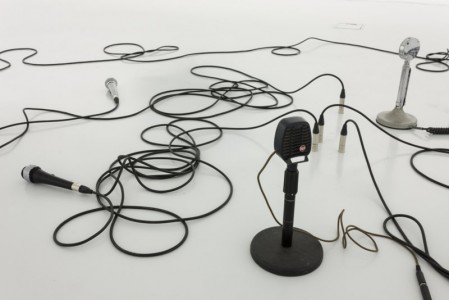 NEW FAITH LOVE SONG by Garrett Phelan comprises an ambitious off-site live performance sound work which will culminate into an exhibition of sound, photography, drawing, sculpture and animation in the New Galleries at IMMA.

The processes and devices employed in narrative cinema are often times subsumed by the visual nature of the medium. This exhibition brings together artists whose work investigates the cinematic process; creating narratives adopted or appropriated from film and the cine-novel, the works allude to the underlying psychological aspect that is integral to the creation of tension within cinema. The artists deconstruct these approaches and open up new questions surrounding the nature of cinema. They demonstrate how the re-interpretation of a scene or dialogue can alter its meaning, exposing the structured layers of the cinematic process.

Kirschner & Panos Living truthfully under imaginary circumstances is a multi-channel video installation based on the acting techniques developed by Sanford Meisner, which remain highly influential on American cinema and drama. The technique emphasizes the importance of improvisation and creating a subtext through emotional responses. Intense repetition and observational feedback allows for the actors to recreate an authentic experience and emotional response in their performance. The method is based on theories of the ‘true’ nature of human behavior. This piece allows the viewer to recognize familiar methods in acting that once seen as radical are now formulaic in popular cinema and soap operas. The installation combines footage of young actors working with Meisner’s exercises and material from the history of theatre and cinema. Kirschner & Panos aim to interrogate the assumption of post-modern naturalism and its blurring of the distinction between dramatic artifice and seemingly ‘primal’, ‘human impulses’.

Allan Hughes Point of Audition examines established functions of the recorded voice in cinema and its position of subjective authority that is essential to the connection between body and voice   The two channel, synchronized video installation takes as its starting point the role of the tape recording device and the established access to self determination of the cinematic voice-over in the narrative of Alan J. Pakula’s Klute (1971). Hughes reconstructs one of the scenes with Bree Daniels (Jane Fonda) and the analyst and imposes vocal extracts from Fonda’s Radio Hanoi transcriptions. Jane Fonda’s identification with her character, Bree Daniels, in the film was deeply empathetic and in particular her understanding of the process of subjective authority that is intrinsically bound up with ideas of the relationship between body and voice. This was an understanding that she was concurrently engaging with in her own life as she protested American policies in the Vietnam War and specifically when she took the opportunity to ‘lend her voice’ to the anti-war movement by traveling to Vietnam and speaking out on Radio Hanoi in the summer of 1972. Here Fonda made a series of politicised statements given in protest to American involvement in the Vietnam War, infractions of the Geneva Convention and the policies of President Nixon’s administration. They were directed primarily towards U.S. soldiers based in Vietnam. The works examines the function and effect of remediation on the voice and explores the consequences of establishing the voice as an object that is extra-linguistic to speech. The material aspect of the voice shifts between historical subjects, the work and the spectator.

Allain Robbe Garillet’s novel Jealousy is the starting points for Laurence Kavanaghs sculpture Jealousy. The novel is a series of repetitive description of settings and objects that infer the psychology and interiority of the unseen narrator. Kavanagh interprets these encoded cinematic descriptions and recreates scenes through a three dimensional sculpture. Constructed from everyday materials the sculpture plays with both the real and the imaginary, creating a set through which the viewer can recreate both the tension and the scenes that is present in the cine-novel. The meticulous attention to detail and the layering of scene on scene reflects the complexity of the text and the obsessive nature of the narrator.

The presence of each piece within the darkened gallery space alludes to the cinema space as well as theatre. The exhibition identifies specific strategies used by artists to articulate their understanding of the role of cinema within both the historical and present context. This ongoing dialogue between art and cinema is constantly shifting and evolving, more so with the development and access to new technologies as well as to film archives. This has created an expanded framework and reference point from which we can extend our understanding of the moving image and its implications.