Sonia Shiel’s work is vested in fictional and non-fictional narratives that are illustrated through painting, video and animated sculptures, the works are inherently painterly and explore the materiality of paint.  The exhibited works serve as storyboards where the singular image becomes indicative of a larger story. Pitching base, human aspirations to survive against their odds, idyllic scenes of industry, nature and society are underscored with the preposterous violence, inflated caricature and infatiguable resilience of cartoons. Set in ungoverned, fictional or lawless environments; the wild west; the high seas; the animal kingdom and so on – Shiel’s protagonists in their various well intentioned pursuits, are confronted by nature, mortality, chance and systemic obstacles of their own creation.

Much of Shiel’s work has been influenced by various traditions of storytelling. Misadventure Seeks Rainy Afternoon sees the introduction of legal narratives into her practice, the questioning of human ethics and how law creates a code that determines what is moral and immoral are subjects that are brought to the fore. Following its often perverted course, a series of painted works draw on the impotency of justice against the natural world. We have an innate ability to make moral assessments when faced with certain situations, Shiel’s works posits scenario’s where we make evaluative judgements becoming at once both judge and jury based on our own established moral code. The misadventure is to allow for only one reading or outcome.

Ormston House in partnership with Limerick City Gallery of Art, will present Bring in the Noise curated by Mary Cremin. The exhibition focuses on artist’s whose practice engage with and appropriate technology creating assemblages and installations. Each of the artist’s works tends to investigate the everyday through science, technology, and mathematics. The works appeal to our natural desire to understand what surrounds us through visuals, sound and objects. The sound element of the works inhabit the space interacting with each other, creating a soundscape that is both playful and individual to each of the works

David Beattie’s pieces Auto-rock, 2013 and Erratic, 2013 combines Beattie’s interest in low fidelity sound and organic movements. The rock an inanimate object becomes a means to interrupt and determine the sound of the rotating record. The piece Erratic a 360-degree documentation of a rock in the landscape reflects on movement and our viewing of the elemental in the landscape, it echoes the rotation of the record player in Auto-rock and the repetitious voice punctuates its movement.  The piece 12.8hz, 2011 is a sculptural work that emits a sound that is inaudible to the human ear. These works highlights Beattie’s preoccupation with the intermediary moments where physics, philosophy, technology and nature collide. The low fi nature of his works and the simplicity with which these objects are presented create a dynamic interplay between the relationship of the object and it becoming something other.

Laura Buckley’s, ZigZag (The Magic Know-How), 2013 is a projection of a visual landscape documenting the everyday objects that she comes into contact with, both inside and outside of the studio.  Buckley manipulates footage interplaying it with images creating a texture and color that are both saturated and visually arresting. The mirrored structure allows for the images to expand and contract, the ambient sound of the work creates a rhythm to the visuals that accentuates the movement within the piece and the splicing of static and moving images creating a dialogue between the different visual techniques that Buckley experiments with that has it’s own visual narrative.

Alexander Gutke’s, 1-2-3-4 , is video work that plays with the notion of sculpture and performance. The lone snare drum and the cacophony of falling drumsticks focuses on illusionism, the cinematic and performance. Gutke’s work is investigative in that he is interested in the mechanics of the camera, film and slide projectors, he often uses these as tools to create a poetic and minimalist deconstruction of the apparatuses while in this film he engages in visual and aural trickery not to deconstruct the mechanics but to create an almost mystical performance without human intervention.

What connects these artists is the sense of illusion that pervades the works, they play with the viewer’s perception through both visual and sounds while also taking everyday objects appropriating them and reanimating them in an alternative context that is both poetic and romantic.

LotusEater is the title of an ongoing collaboration between Aoibheann Greenan and a Dublin based band of the same name. The project explores various levels at which the work can be experienced and disseminated, it will take multiple forms; an immersive installation consisting of sculptural assemblages, props and costumes; a one-night music performance. The exhibition will evolve as works are added throughout its duration culminating in the LotusEater performing in the gallery space.

The Greek myth that surrounds the lotus-eater infuses the exhibition with the same sense of entering an exotic set or that in-between space that is often associated with altered states of consciousness. Odysseus returning from the Trojan War tells of North African people who lived in a state of blissful forgetfulness, drugged by the fruit of the legendary lotus. Greenan deliberately attempts to illustrate the experience of disorientation and dislocation through her sculptural assemblages. The pieces reference her recent travels to India and Reykjavik, Iceland exploring the hybridization of cultures. Myths and symbols are reconfigured creating a pastiche of tropes that we recognize but which become unfamiliar somewhat sinister in Greenan’s reinterpretation. The element of kitsch through her use of b-movie references and counter cultural motifs remind us that on reflection each viewer brings their own cultural baggage to the interpretation of the pieces. The sculptural constructions explore a biographical history, that is both self-reflexive and provide a broader means of critiquing society and the history of cultural accumulation.

There is a harmony between symbol, legend and visual impact that creates a visual lexicon that is both familiar and estranged. 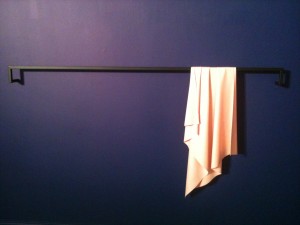 Eleanor Duffin explores the subtle relationship between objects and humans. She questions why we are drawn to certain inanimate objects. Is there an immaterial force that connects us to these objects? Plato wrote about Anima Mundi, which was the idea that the planet has a soul that is somehow connected to all living bodies that inhabit it. Similarly, Totemism, an important element of tribal cultures believes the power of inanimate objects to hold “conscious” spirits that interact with society. In recent times, there has being a crisis in faith and from this spiritual void there is a return to more philosophical notions of how we inhabit the world. We have become defined by what we consume or desire, in this exhibition the artist pares back visual elements that pique our visual senses allowing us to experience different materials with a more heightened sense of awareness.

In a time where our levels of sophistication in terms of technology and how we inhabit the world is changing rapidly this return to ideas of animism, which can seem quite basic or archaic are really the fundamentals from where culture emerged. Global and ecological crisis and the failure of the capitalist system have been instrumental in our shift to appreciating the materiality and signification of the elements that surround us.