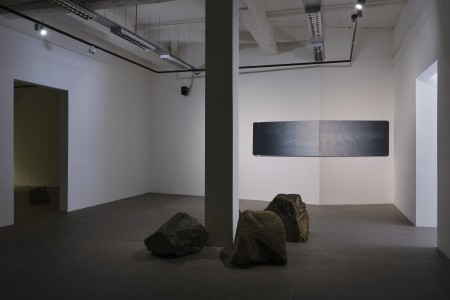 BLACK MED SECCO, a solo exhibition by Invernomuto, the name of the artistic personality created in 2003 by Simone Bertuzzi and Simone Trabucchi. Invernomuto’s works are research-based projects that often use cultural references as their starting points and utilise open systems to disseminate their work – outputs that take the form of moving images, sounds, performative actions, and publishing projects.

For their exhibition at Void, Invernomuto will create an immersive sonic, physical and visual environment referencing the Mediterranean basin. David Abulafia, the historian refers to the Mediterranean as a sea with many names: an in-between sea or sea ‘between the lands’. He writes about the world having several ‘Mediterraneans’, all of which present us with vast, empty spaces like a sea or a desert that have helped to bring into contact with each other very different cultures. Throughout this exhibition Invernomuto delve into the idea of the sea historically being a crossroad of cultural exchanges and a space of contention that separates us and bring us together.  In gallery one, through their research in the textile collection of the Museum Studio Del Tessuto (Fondazione Ratti, Como) they have created a walled work using moiré textiles that allude to the refraction and movement to the sea. This pattern is replicated in the live stream in gallery two of Black Med. 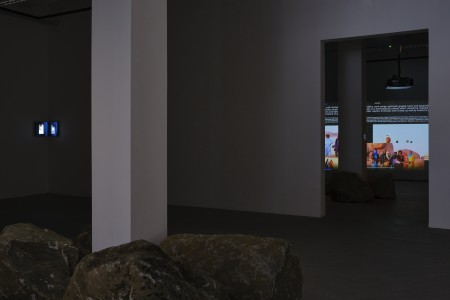 This is an online platform (accessible on blackmed.invernomuto.info) that is an archive of music that is compiled by Invernomuto and a vast array of invited artists and contributors. As part of the live projection stream the music is accompanied by projected slides containing theoretical texts and backstories that enliven the score. This music archive demonstrates the dynamic, multi-cultural sounds and music that emerge from this region and beyond. The intention of the project is to create an open and live system so anyone can upload new sounds into it: the goal is to have a growing archive, a Black Med magma, which constantly evolves. 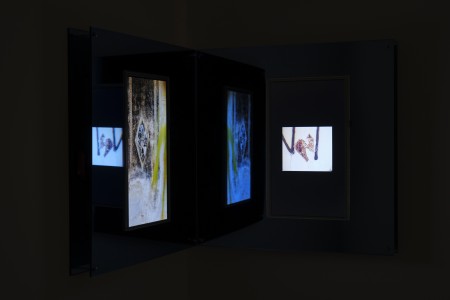 Black Med is an ongoing project initiated by Invernomuto in 2018. The Mediterranean Sea, once understood as a fluid entity aiding the formation of networks and exchange, is now the scenario of a humanitarian crisis and heated geopolitical dispute. The migration crisis across the world, be it for reasons of economics, war or climate change, is escalating and while one crisis is in the news, the others continue to be exacerbated. Migration has been one of the biggest and most divisive political questions of the twenty-first century, and it seems likely to be a central part of our politics going forward, especially in the Mediterranean area where several continents and migration regimes meet. The notion of the Black Meditererranean captures the long history of racial subjugation and sites of resistance. It  tells the complex story of colonial history and a post-colonial world where borders and frontiers represent fortress Europe.  This exhibition creates opportunities for the audience to expand their cultural frameworks and explore their ideas of the periphery, the center and the in-between spaces that are often precarious, transitory and transactional. 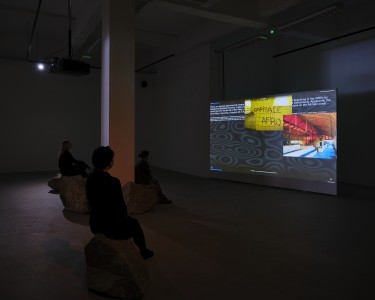 Hazelwood Estate presents Magnetism, a major contemporary art exhibition in the old Snia/Saehan factory that sits on the peninsula at the historic site of Hazelwood in County Sligo.

The exhibition also features a programme of VHS based artworks selected with an international team of researcher/curators entitled REWIND <PLAY> FASTFORWARD and a programme will be made available in exhibition.

A major contemporary exhibition, MAGNETISM has taken over seven rooms of the old Snia/Saehan factory where the extraordinary scale of the space allows for the exhibition of what could be called “extreme objects”; or large-scale works that populate the immense rooms of the factory. These dynamic sculptural works have a transformative effect on the former industrial spaces – including the huge videotape ‘pancake’ stores and welder’s workshop – through inflatables, lighting, motors, draping and film projection. 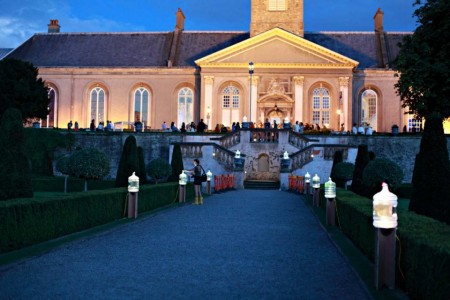 Hélio Oiticica proposed with his work ways ‘of giving the individual the possibility to ‘experiment’  to no longer be the spectator and become the participant’, and it is in this spirit that IMMA invited visitors to be part of the SUMMER RISING – to taste, to listen, to look , to enjoy and most of all to take part. 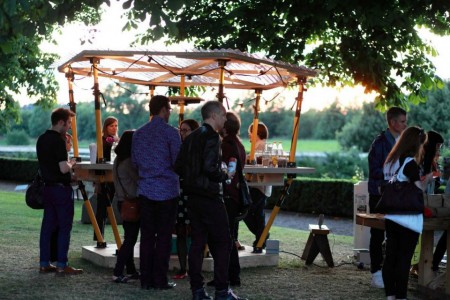 A ten day festival of music, food, talks and performances

IMMA is delighted to present this major retrospective of the work of Eileen Gray, one of the most celebrated and influential designers and architects of the 20th-century. Designed and produced by the Centre Pompidou, Paris, in collaboration with IMMA, this exhibition is a tribute to Gray’s career as a leading member of the modern design movement. The exhibition at IMMA celebrates Gray’s Irish roots and presents a number of previously unseen works that offer new insights into Gray’s extraordinary career.

Gray’s work has often been split into two parts by critics, with decorative arts on the one hand and architectural modernism on the other. This exhibition approaches Gray’s work as a whole, engaging, as she did, in drawing, painting, lacquering, interior decorating, architecture and photography. Renowned in France during the early decades of the 20th-century as a designer in lacquer furniture and interiors, Gray began to experiment with architecture in the late 1920s. The exhibition includes lacquer work, several of her carpet designs, samples from her Paris shop Jean Désert and key items of furniture from her work on the apartment of Madame Mathieu Levy and Gray’s own home, Tempe à Pailla.

Significant focus is given to her landmark piece of modernist architecture the French villa E-1027, built in Roquebrune-Cap-Martin in 1926-1929, in close collaboration with Romanian architect Jean Badovici. The exhibition includes examples of furniture for E-1027, including the tubular steel designs with which Gray’s name has become synonymous.

Eileen Gray (1878-1976) was born near Enniscorthy, Co Wexford and spent most of her childhood between Ireland and London. In 1902 Gray moved to Paris. She died in France at the age of 98. This extensive exhibition presents a unique opportunity for Irish audiences to experience a large group of work by one of Ireland’s most important cultural figures. 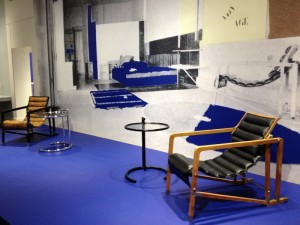 The Pavilion of Ireland

Kilkenny, Ireland, 1 March 2013 – Richard Mosse will represent Ireland with The Enclave, a major new multi-media installation at the 55th International Art Exhibition – La Biennale di Venezia. The Commissioner and Curator is Anna O’Sullivan, Director of the Butler Gallery, Kilkenny, Ireland. Ireland at Venice is an initiative of Culture Ireland and the Arts Council/An Chomhairle Ealaíon.

Throughout 2012, Richard Mosse and his collaborators Trevor Tweeten and Ben Frost travelled to Eastern Congo and inserted themselves as journalists within armed rebel groups in a war zone plagued by frequent ambushes, massacres and systematic sexual violence. The resulting installation, The Enclave, is the culmination of Mosse’sproject, Infra, which employs a discontinued military reconnaissance film that registers infrared light – an invisible spectrum – and was originally designed for camouflage detection. Mosse uses this film to reveal a cancerous yet unseen humanitarian tragedy with a disturbing psychedelic palette, posing aesthetic questions in a situation of profound human suffering. 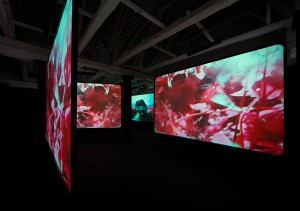 “I am beginning to perceive this vicious loop,” Mosse writes from Goma, “of subject and object. The camera provokes an involuntary unraveling, a mutual hijack of authorship and autonomy.” Neither scripted nor directed, Congolese rebels return the camera’s gaze in a distinctly confrontational and accusatory manner. The lens seems to mesmerise and provoke everyone it encounters in The Enclave, including rebels ﬁghting under the command of those sought for trial by the international criminal court. This precarious face-off reveals inherent ambiguities of masculinity,defiance,vulnerability, and indictment. These narratives defy human comprehension, and push past the boundaries of adequate representation. The Enclave is an attempt to recoup ethical agency for aesthetics. Disregarding the rules and protocol of journalism, and working independently of humanitarian and UN infrastructures, Mosse, Tweeten and Frost have created a discomfiting and sinister world to penetrate sensibilities and make this ineffable nightmare visible.

Becoming is a mid-career retrospective of the work of Alice Maher, one of Ireland’s most respected and influential artists. Including painting, sculpture, photography and animation, the exhibition will include seminal works such as Berry Dress, 1994, from the IMMA Collection; Familiar, 1995, from the Crawford Art Gallery, and many other works held in IMMA’s own Collection.  The title Becoming, hints at some of the main preoccupations of the artist and the themes that will be explored in the exhibition.  A dress can be becoming or flattering; one’s behaviour can become you, as you act in an appropriate way within a social construct; but becoming also points at a point of transformation where something becomes something else, Maher’s work has always placed itself at this nexus, a point of metamorphosis where there is continuous flux as states shift and the familiar becomes otherworldly or unknown – where the inappropriate and the unacceptable are constantly called into play.

Maher’s work is itself in a state of continuous metamorphosis as her themes and interests have manifested themselves in differing states during the past twenty years.  Material transformation is evident as the artist has interrogated her subject through the use of painting, drawing, sculpture, video, and more recently digital technologies and new media.  Through constant change, reworking and examination, Maher uncovers evermore complex readings and meanings of the world around us.