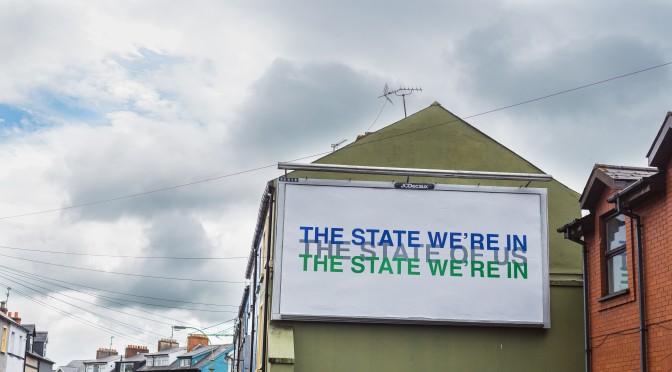 Irish artist Eva Rothschild has created an ambitious and immersive exhibition for the Irish Pavilion at the 58th International Art Exhibition – La Biennale di Venezia. Continuing her exploration of sculptural presence, Rothschild presents a physical environment which materially resonates with current political concerns and our ongoing sense of global uncertainty.

The Shrinking Universe consists of four works made up of multiple elements. Each sculpture retains its own distinct presence while forming a cohesive totality within the pavilion. The array of materials that Rothschild uses in her work, alongside the distinction between the presence of the artist’s hand and industrially-created works, brings about a tension between the monumental and the personal. Drift (2019), a wall of cast concrete blocks painted in Rothschild’s signature geometric forms, is architectural and foreboding, its position controlling our entry to the space. Heaped against this wall we find a mass of cast forms hovering between the referential and the abstract, alluding to both geographical forces and the disposable nature of consumable materials.

In Amphi (2019) a series of cast polystyrene blocks are pushed together, pockmarked and graffitied they are reminiscent of a temporary road block or barricade. The viewer is invited to engage with this social sculpture, to climb and to sit, to directly encounter the piece and to become both spectator and participant, actively present within the work. From this viewpoint Princess (2019) rises from a base of cast columns at the centre of the pavilion, its triangular forms stretching high above the ground and forcing our eyes to trace its precarious and optimistic progression. The sculpture rests on waxed fabric crash mats, demarcating a space of safety around the sculpture, but failing to fully contain it as it meanders beyond its boundaries into the surrounding space.

Both Amphi and the truncated columns reference the ruins of past civilizations, while the antic triangular elements of Princess attempt a progressive geometric escape from their earthbound forms. In the midst of this sculptural activity, Rothschild’s Spektor (2019), a cast bronze of towering head-like forms, acts as a sentinel or ghostly presence: a watcher by the gates coolly observing the other works. Rothschild’s works are dynamically active, unapologetically monumental and bold. Expanding on the artistic lexicon of process, form, scale and materiality, Rothschild creates her own unique sculptural language. The Shrinking Universe is an invitation to look, to be attentive to your surroundings and most of all to be present with the work.