Luke Fowler Pilgrimage from Scattered Points a film about the English composer Cornelius Cardew (1936-1981) and The Scratch Orchestra (1968-1973). Luke Fowler’s films are informed by his research on socially radical figures such as psychologist Ronald D. Laing, musician Xentos ‘Fray Bentos’ Jones and the conservationist Bogman Palmjaguar; they push the boundaries in terms of how we construct or perceive contemporary society. Fowler’s films employ the conventions of documentary film making through the use of archival footage, interviews, still photography, voice-overs and soundscape. This film highlights Fowler’s interest in the nature of collaboration and its possibilities. This is prevalent throughout his work not only in the figures that he researches but in his capacity as a film maker, artist, musician, historian and organiser.

Pilgrimage from Scattered Points documents a pinnacle in British and European history which saw the rise of anti-establishment organisations, the 1968 student protests, the anti-war movement; the Scratch Orchestra was part of that moment and the film moves through archival footage, interviews and predominantly unreleased music to relays the struggles and conflicts of that period. Cornelius Cardew, Michael Parsons and Howard Skempton founded the Scratch Orchestra in 1968; they published their manifesto in The Musical Times in June 1969. The establishment of this orchestra was a reaction against musical conservatism and the avant-garde establishment. The concerts were social experiments, in that they were designed by the members in rotation and based on a non-hierarchical system where all participants; musicians, non-musicians and composers had equal status. The only full length recording of The Scratch Orchestra available is a performance of Cardew’s The Great Learning (1968–1970), a six hour choral work written for the Orchestra based on the Confucian scriptures. The work called for a large number of trained and untrained musicians to sing, speak, drum, perform actions and gestures, improvise and use conventional and unconventional sound sources.

This utopian ideology of creating a musical equivalent to a classless society was the basis of The Scratch Orchestra which is poignant, as in the last thirty years socio-economic inequalities have become far greater. Pilgrimage from Scattered Points explores the possibilities, complexities and divisive nature of political idealism while also calling into question the role of art within society. 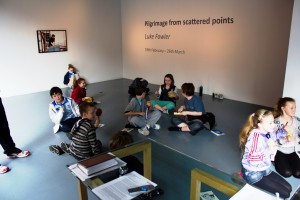