The title of the exhibition is taken from a novel by Fowzin Karimi, that explores the trauma of war and how that reverberates through the generations. Forced migration and the burden of carrying the past to the present and into the future is a condition of many forced into exile.  The impact of war on women and the trauma that seeps through the generations forms the centre point of this exhibition. We have seen the legacy of war on women throughout the Middle East especially in the last year. We have seen the transformation of Afghan society in terms of girls’ access to education and women losing their positions at work. There is also the legacy of the second generation of migrants fleeing to places such as Iran and the US who fled in the 80’s during the Russian invasion of Afghanistan. It has huge implications on people’s sense of place and culture, and how they can regain that sense through returning generations to a place that has only existed in their imaginations and through the stories of their parents or ancestors. The displacement of people is nothing new and throughout history this has been a common occurrence. Women and girls suffer disproportionately during and after war, as existing inequalities are magnified, and social networks break down, making them more vulnerable to sexual violence and exploitation. 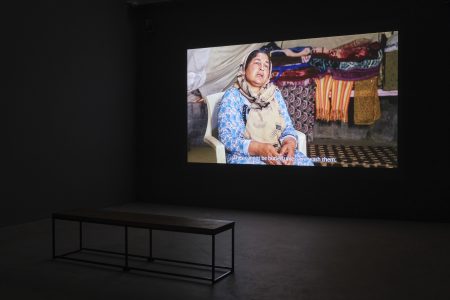 Erkan Özgen’s movie Purple Muslin is a touching contemporary portrait created in collaboration with Yazidi women who escaped the menace of the so-called Islamic State of Iraq and al-Sham forces and sought refuge in Northern Iraq. Erkan Özgen’s project explores the impact of war on the female refugees who fled the conflict zones. The video is an inquiry into the ways in which these women cope with their traumas in an environment full of violence. The artist intends to give them a voice to tell their individual stories and their shared experiences of war, of suffering and displacement. The real force, nonetheless, is the power of “Awakening” (a stirring and often direct document), and its incredible capacity to reveal a vision that can be shared. 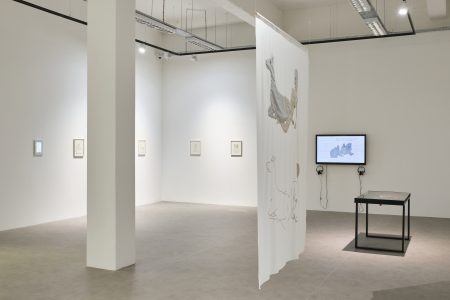 Orna Kazimi animation The Greeness of a Mosque (2021), focuses on the lack of social mobility among the Afghan community in Iran who originally fled the conflict in Afghanistan about four decades ago. A new Afghan generation of children and grandchildren were born into a similar, or worse, socio-political climate as their parents and grandparents faced in Iran due to racism, despite being born in Iran. ‘The Greenness of a Mosque’ depicts the suffering of Afghan mothers, fearing that their children might decide to go to the war in Syria on a promise that their families would receive money and the right to remain in Iran. 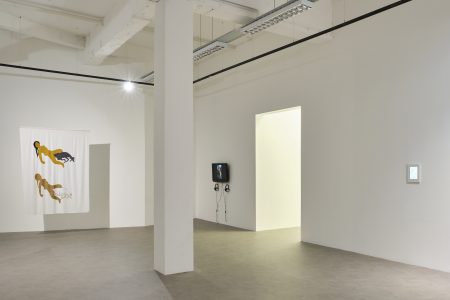 Kubra Khademi’s piece Armour (2015), was a provocative performance that she made in the city centre of Kabul. The performance was made in defiance to the patriarchal system in Afghanistan. She walked through a busy area in central Kabul dressed in custom-made metal Armor: an artistic gesture meant to highlight how women are sexually and verbally harassed in public spaces. After studying fine arts at the University of Kabul, and later at the University of Beaconhouse in Lahore, Khademi committed herself to the continuous reflection of the condition of women’s lives in Afghanistan. Her work spans performance, painting, and drawing. In the last year, Khademi finished a series of large-scale paintings and drawings. They are inspired by the way Afghan women express their sexuality through a coded and subversive poetic language that remains unrecognisable to men.

about the relationship that another artist, Alighiero Boetti, had with the city of Kabul from 1971 to 1979. Following meticulous research lasting over three years, García Torres shows us a new episode: the One Hotel that Boetti opened in the capital of Afghanistan. The images projected in Alguna vez has visto la nieve caer? (Have You Ever Seen the Snow Fall?), along with the off-screen voice, tell of a conceptual journey somewhere between history, myth and fiction, where the past and the present flow together in a story that takes place within other stories. The political substrate can be felt in the film’s reflections on the changes occurring in the landscape and daily life in Afghanistan, especially after the 9/11 attacks in 2001.

Erkan Özgen (Derik, Turkey, 1971) lives and works in Diyarbakır. He graduated from Çukurova University Painting Department in 2000. He works on video based installations and has participated in group exhibitions in Turkey and abroad. Most of his recent films deal with migration and human rights. Purple Muslin was presented as a worldwide premiere at Manifesta 12 (Palermo, Italy, 2018) and won a unanimous public acclaim.

Orna Kazimi is a visual artist based in London. Orna’s work and research explore personal encounters with migration in relation to collective trauma and memories of displacement through drawings, installation and writing. Her work has received recognitions and nominations for a wide range of prizes and grants such as Ingram Art Prize in 2021 (shortlisted) and the Writers Grant funded by Creative Debuts in 2020.

Kubra Khademi (born 1989) is an Afghan performance artist based in Paris.[2] She studied fine arts at Kabul University. In Lahore she began to create public performances, a practice she continued upon her return to Kabul, where her work actively responded to a society dominated by extreme patriarchal politics. After performing her piece Armor in 2015, Khademi was forced to flee Afghanistan due to a fatwa and death threats. She is currently living and working in Paris.

Mario García Torres (born 1975 in Monclova, México) is one of the most internationally renowned Latin American artists. He has used various media, including film, sound, performance, ‘museographic installations’ and video as a means to create his art.

Garcia Torres often mentioned untold or ‘minor’ histories, as departing points for his work. He has re-created historical exhibitions and has even ‘completed’ unfinished artworks, often blurring original and reenactment, past and present, while questioning universal ideas about truth, certainty and time –all core ideas in the development of his body of work. During the early 2000s García Torres stopped dating his works; In so doing, he undermines the narrative of an oeuvre and career as a progressive evolution over time. n.d. (no date) often accompanies, since then, the work’s title, and has become a signature of the artist.

His work has been shown at the Museo Nacional Centro de Arte Reina Sofia, Madrid; the Walker Art Center in Minneapolis, the Hammer Museum in Los Ángeles, and the Stedelijk Museum in Amsterdam among many others. He has participated in international biennials like the Venice Biennale, the Sao Paolo Biennial and the Documenta in Kassel.